The Trump administration has been busy chipping away at Obama-era regulations. As of July 2017, Donald Trump has issued over forty Executive Orders and dozens of Presidential Memoranda and Proclamations. The intent of many of these is to remove regulatory burdens on developers, the agriculture industry, and business more generally. One of Trump’s primary targets has been environmental regulations, and wetland regulations in particular have been in the crosshairs. Trump has followed through on a campaign promise to revisit – with an eye toward rescinding – the Obama administration’s Clean Water Rule. That federal pullback from wetland regulations may have unintended consequences in California, which is on the cusp of promulgating new wetland regulations of its own.

From their very inception, federal wetland regulations promulgated pursuant to the Clean Water Act have been a target of controversy and consternation. No one on either side of the spectrum has been happy, and standing in the middle of this regulatory angst are the U.S. Environmental Protection Agency and the U.S. Army Corps of Engineers, the two agencies tasked with regulating the fill of wetlands for development pursuant to the Clean Water Act. As with most controversial regulations, the wetland regulations evolved over the years, swinging like a pendulum from protective to not-as-protective, as a result of litigation brought by environmentalists and industry interests.

But the real twists and turns of this saga have been punctuated by sporadic pronouncements by the U.S. Supreme Court. 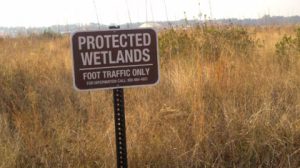 The Court’s most recent decision on wetland regulations came in the form of a fractured opinion in which no majority view emerged. That case, Rapanos v. United States, involved a challenge to the Corps’ determination that a permit was required to fill wetlands slated for development of a mall. The landowner argued that the Corps was overreaching and had no jurisdiction over his wetlands because they were not “waters of the United States,” a term of art that once applied to a wetland gives EPA and the Corps the ability to exercise their permitting authority. The U.S. Supreme Court gave us little to no unifying guidance on what constitutes “waters of the United States.” Of crucial importance now, however, is the plurality opinion authored by the late Justice Antonin Scalia. Citing Webster’s New International Dictionary: Second Edition, Justice Scalia adopted a literal approach to the definition of “waters of the United States,” and declared that the agencies’ jurisdiction under the Clean Water Act includes only relatively permanent waters and wetlands with a continuous surface connection to relatively permanent waters.

In the wake of Rapanos, EPA and the Corps provided some informal guidance to landowners and developers on how the agencies would apply the Rapanos decision. The Clean Water Rule adopted by EPA and the Corps in 2015 emerged from this guidance and from efforts by the agencies to evaluate proposed definitions of “waters of the United States.” The Rule was controversial from the beginning, and it quickly became enmeshed in litigation because of its (both real and perceived) expansion of the agencies’ jurisdiction. The Rule soon became a political target as the 2016 election year got into full swing. Trump fully embraced the issue, and said on the campaign trail in May 2016 that “we’re going to rescind all the job-destroying Obama executive actions including . . . the Waters of the U.S. rule.”

That promise was fulfilled on June 27, 2017. In response to an Executive Order issued by Trump earlier this year, EPA and the Corps formally announced the proposed rescission of the Clean Water Rule and re-codification of the regulations that existed prior to the Rule. According to the Federal Register Notice announcing the rescission, the agencies intend to follow this action with formal rulemaking to “conduct a substantive re-evaluation of the definition of ‘waters of the United States.’” Thus far, no hard-and-fast timeline has been offered for when that proposed “re-evaluation” will be available.

We may not know when it will be available, but we have a good idea of what it will look like. Trump’s Executive Order previewed the substance of the new definition. The Order makes it clear: the agencies must take into consideration Justice Scalia’s opinion in the Rapanos case. This means it is likely the new definition will focus on more literal interpretations of “waters,” which in turn means a much more narrow view of EPA’s and the Corps’ scope of jurisdiction under the Clean Water Act.

In short, the new rule likely will reflect a significant federal pullback on regulating wetlands.

What does this mean for wetland regulations in California? This question is particularly relevant now because a federal pullback on wetlands regulations is sure to contribute to a perfect storm of events currently unfolding in Sacramento.

For over a decade, the State Water Resources Control Board has been working on a wetland protection and regulation policy to address some of the uncertainty created at the federal level by the U.S. Supreme Court. Rapanos and other Court decisions, most notably Solid Waste Agency of Northern Cook County v. U.S. Army Corps of Engineers, or “SWANCC,” created “gaps” in the overall regulation of wetlands by establishing the bright line rule that intrastate, non-navigable, and isolated waters are not “waters of the United States” subject to EPA’s and the Corps’ jurisdiction. Instead, these waters are considered “waters of the State of California,” or simply “waters of the State,” and they are subject to a separate permitting regime established by the State’s Porter-Cologne Water Quality Control Act. 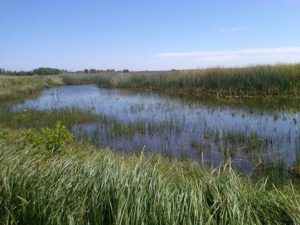 The State Board’s draft wetland policy – recently renamed the State Wetland Definition and Procedures for Discharges of Dredged or Fill Materials to Waters of the State – is a quantum leap in the Board’s wetlands permitting and regulation regime. As its title suggests, the policy proposes a formal definition of “wetlands,” which is not currently defined or applied with any consistency across the natural resource statutes in California. In addition, the policy proposes a permitting process that mimics the onerous, costly, and time consuming process used by the Corps for authorizing wetland fill under the Clean Water Act.

A 2016 draft of the policy received numerous comments objecting to the State Board’s proposed definition of wetlands and permitting process. Notably, the U.S. Army Corps of Engineers raised serious objections to the State Board’s putative authority to issue the policy, citing federal preemption and issues related to the policy’s consistency with its own wetland permitting program under the Clean Water Act. Other commenters raised issues related to the definition of wetlands being too vague, arbitrary, and irrationally expansive, and the process for permitting wetland fills as being too cumbersome and costly.

The State Board responded to these comments and issued a revised draft of the policy on July 21, 2017. Unfortunately, many of the issues raised by the commenters remain unresolved. The Board’s timeline for final approval of the policy is aggressive, particularly given what will likely be a controversial and highly charged approval process. According to its website, the policy is expected to be adopted by the Board sometime “Winter 2017.”

What may motivate the State Board to meet this aggressive timeline, and to charge ahead with a policy many view as vague, onerous, and duplicative, is the federal wetland regulations pullback. In effect, the federal pullback may be responsible for a California pushback.

Nature abhors a vacuum. As the Trump administration narrows the federal government’s ability to regulate wetlands, the State Board may use its new wetland policy to fill the regulatory void that will be created. It can be dangerous to prognosticate too much, but in light of California’s generally pro-environmental politics, one thing is virtually certain – the State will be emboldened to fill the “Trump Gap,” as some of us in the industry have been referring to it, as the federal government begins to pull back from wetland regulations. Somewhat ironically, in California we can expect yet another layer of regulatory oversight as a result of this federal pullback. Stay tuned.