2015 is shaping up as a year of significant developments in land use law thanks to the Governor, the Legislature, and the courts. Here’s an update on anticipated developments related to Sea Level Rise, Affordable Housing, Traffic Impact Analysis and the Drought, any or all of which could constrain land development: 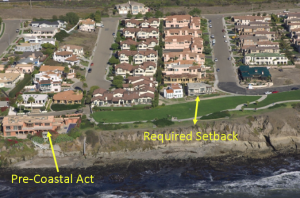 ment and infrastructure.” Add in impacts to tourism, commercial fisheries, coastal agriculture, the ports, and sensitive coastal resources and it is easy to anticipate that the projected risks from sea level rise will create tough decisions for the Commission as it acts on Local Coastal Programs, LCP amendments, and Coastal Development Permits. Hazard avoidance and mitigation are likely to result in proposals for significant constraints on development. Every site and project will be different, but it will be important to evaluate the potential significance of sea level rise over the life of the project in the context of any investment or development within the Coastal Zone. The picture above is from a presentation by Charles Lester, Executive Director of the Coastal Commission, to the Senate Budget Subcommittee 2 on March 20, 2014. It shows a pre-Coastal Act home and more current setback requirements along a blufftop in Pismo Beach which has been impacted by bluff erosion.

. . . AFFORDABLE HOUSING FEES: We told you earlier this year that the California Supreme Court will be weighing in on the validity

of an in lieu affordable housing fee in San Jose.   Oral arguments in California Building Industry Association v. City of San Jose (click here to read the appellate court decision which is under review) were heard on April 8. CCN’s Mike Zischke was in attendance and observed an engaged and inquisitive Court. When this decision comes down, its significance likely will go beyond the affordable housing issue. With two new Justices sworn in at the beginning of this year, this decision could foretell where the Court will lean on land use issues, particularly those involving exactions and impact fees.

. . . THE DROUGHT: Governor Brown’s Executive Order calling for a 25% reduction in the State’s water usage will impact not only daily life for Californians (there goes that ten-minute shower), but potentially development proposals. At a time when some areas in the state are experiencing housing shortages, there undoubtedly will be pressure from some interest groups to cut back on the development of new housing. It’s too early yet to understand what the full effect of Executive Order B-29-15 will be, as local water agencies and local governments will be developing their own policies to comply with the Governor’s directive.

END_OF_DOCUMENT_TOKEN_TO_BE_REPLACED

In many cities throughout California, concerns about traffic have made the State Density Bonus Law (“DBL”) a four letter word. Developers who are otherwise willing to provide affordable units as a component of a market rate multifamily or mixed-use project are increasingly discouraged from doing so. And it’s not getting any easier. On September 27, 2014, Governor Brown signed AB 2222, amending the DBL in response to a growing perception that the DBL could be implemented in a manner that could result in a net loss of existing affordable housing units for new housing projects. The bill requires developers to identify and replace all of a property’s pre-existing affordable units to be eligible for a density bonus under the DBL. While that goal sounds reasonable, in practice, it may prove to be difficult to implement and will most likely not achieve the intended result of retaining and creating more affordable housing throughout California. END_OF_DOCUMENT_TOKEN_TO_BE_REPLACED

The context of the Court’s decision is that of a “qualified” voter-sponsored ballot measure. For most local jurisdictions (i.e., a city or a county), a measure “qualifies” for the ballot when at least fifteen percent of the number of registered voters within the jurisdiction sign a petition to place the proposal on the ballot. Once sufficient signatures are confirmed, the legislative body of that jurisdiction (the City Council or the Board of Supervisors) has the choice of either placing the measure before the voters or approving the measure itself without change. Those are the only options. It has long been clear that if the measure is placed on the ballot and approved by voters, CEQA does not apply. However, the California Supreme Court has now determined that if the City Council or Board of Supervisors approves the measure itself rather than sending it to the voters, CEQA still does not apply. END_OF_DOCUMENT_TOKEN_TO_BE_REPLACED